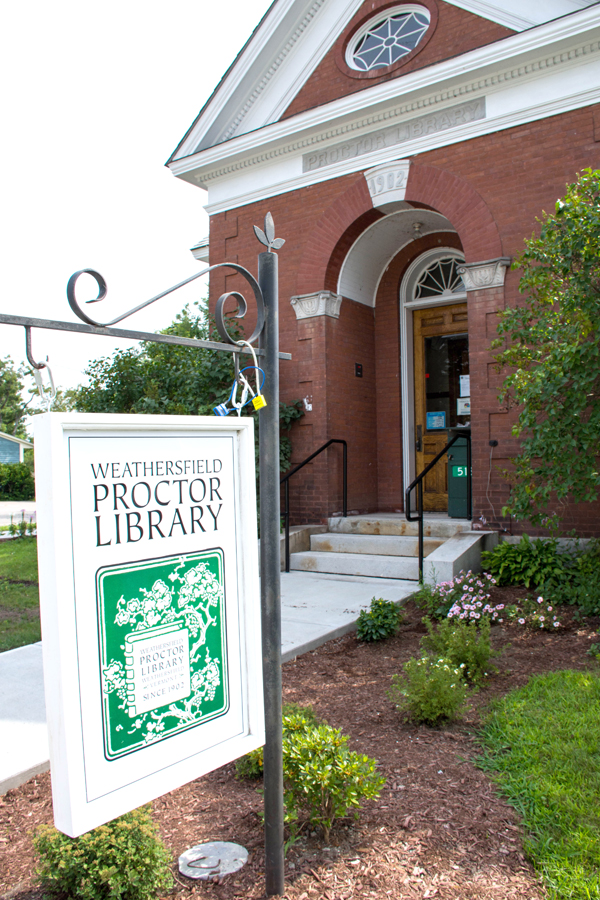 Library Location
The library is located at 5181 Route 5, just north of the intersection with Route 131, in the hamlet of Ascutney, Vermont, just across the bridge from Claremont, New Hampshire.

Board of Trustees
List of current members for the governing board of the library.

Friends of the Library
Learn about all of the ways they support the library.

The Weathersfield Proctor Library is a small red brick building located on Route 5 in Ascutney, Vermont. Dedicated in 1903, it was the gift of Benjamin Franklin Blood in memory of his mother, Roxalana Proctor Blood.

Born in nearby West Windsor, Blood became a farmer and moved to Waltham, Massachusetts, but he honored the area where he grew up by leaving the Proctor Library and two other libraries in adjoining towns: the Mary L. Blood Memorial Library in West Windsor (1901) and the Windsor Public Library (1904). (Blood was the only benefactor to build three libraries in Vermont, with the exception of Andrew Carnegie who funded four.)

Construction of the Proctor Library was begun in 1901, the year the West Windsor library opened. The two buildings were identical in design, floor plan, building materials, and interior. The stone for the foundation of the Proctor Library came from the pasture of Blood’s grandparents where he had played as a boy. Two artisans from Claremont, New Hampshire were responsible for the outside of the library: Denis Landry was stone worker and John Wadleigh was brickmason.

Edgar D. Sawin, who was employed as the Estey Organ Company in Brattleboro, used solid oak in the fine interior cabinetwork, paneling, and intricate ceilings. Blood provided the heavy oak furniture, while others donated a rolltop desk, a large table with eight chairs, and a students desk with four chairs.

At town meeting in March 1903, voters accepted Blood’s fine library and agreed to care for the Proctor burial lot in the Ascutneyville Cemetery. The dedication exercises on June 9 were held on the 81st birthday of Mrs. Newton Gage, donor of the site. Professor Bisbee, librarian at Dartmouth College, was main speaker and the Claremont band provided music. After Blood turned over the deed to the library, Nellie P. Blanchard started her new job as librarian at $75 a year.

The Renaissance Revival building has a recessed archway at the entrance, gable with small windows featuring simple tracery, and a slate roof. Built in the form of a Maltese cross, it has a vestibule, alcove, main book room, and reading room (now the children’s room) with brick fireplace.

From, Where the Books Are: History & Architecture of Vermont’s Public Libraries with Photos & Anecdotes by Patricia W. Belding: Potash Book Publishing, 1996.